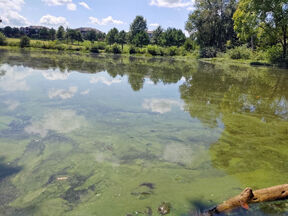 Harmful algal blooms often begin to occur in early to mid-summer in Arkansas, as temperature rise.

As temperatures rise and summer moves into full swing, wildlife on the water is also returning to its seasonal proclivities — for better and for worse. As of July, the first harmful algal blooms of 2020 have been reported in Arkansas.

Harmful algal blooms are a fact of life in the state and elsewhere, on rivers, ponds and other bodies of water. The blooms are defined as the excessive growth of microscopic cyanobacteria or blue-green algae in water that can cause harm to animals, people or the local ecology.

A bloom may have a paint-like appearance, or look like a foam, mat or scum. The coloration may appear blue-green, green, yellow, white, brown, purple or red, and will often have an unpleasant odor.

The harm to human and animal health caused by an algal bloom can range from minor symptoms, such as skin irritation and gastrointestinal irritation, to serious medical issues including death (although this is rare). Signs of cyanotoxin poisoning depend on the type of toxin, toxin concentration, amount consumed, size of the individual and exposure route.

To assist Arkansans in recognizing, understanding and treating harmful algal blooms, the University of Arkansas System Division of Agriculture has developed a fact sheet.

The fact sheet will be available at Cooperative Extension Service offices throughout the state in August.

John Pennington, extension water quality instructor and associate director of agriculture and natural resources for the Division of Agriculture, said that a work group composed of representatives from federal, state and local agencies, nonprofit organizations and municipalities developed the publication in response to increasing reports of harmful blooms in Arkansas.

“With the increase in calls to county offices about reported and identified harmful algal blooms throughout the state, the UA water quality team wanted to develop a resource that would be helpful to the public in recognizing, understanding and treating them,” Pennington said.

Most recently, a bloom was confirmed in Lake Overcup in Morrilton. The Arkansas Game and Fish Commission, which manages the lake, issued a health advisory warning.

While a harmful algal bloom will rarely contain toxins, it is capable of producing them and releasing them under certain conditions that are not yet completely known.

The blooms most often occur in summer and fall when the weather is warm and calm, as the blue green algae or cyanobacteria can migrate toward the optimal growing conditions near the water surface.