The lower Neuse River is known for many things, including sportfishing and magnificent and serene views from homesites, campgrounds and parks, but increasingly often during this time of year, a foul stench begins arising from its waters.

“The last five summers there’s been quite a few blooms that have really worried people enough to where property values are starting to be at risk because of summertime blooms, or people can’t enjoy swimming off their dock,” Dr. Nathan Hall of the University of North Carolina Institute of Marine Sciences recently told Coastal Review.

The North Carolina Department of Environmental Quality submits a biennial list of the state’s impaired waters to the Environmental Protection Agency under the Clean Water Act. The draft impaired waters list for North Carolina released for public comment earlier this year is part of an effort to address poor water quality conditions across the state, but it also prompts questions about how to best carry out any restoration work and which water bodies should be listed.

The public comment period on the draft ended in April.

Once a water body has been listed as impaired, the state must develop a restoration plan that includes standards for reducing pollution — a path to improved water quality.

Nutrients such as nitrogen and phosphorus are found naturally in ecosystems, but when overly abundant in waterways, they can create algal blooms that, in turn, can reduce the amount of oxygen in the water and cause loss of marine life, including fish kills.

EPA guidance suggests that nutrient sensitive waters are at least “expected not to meet standards,” and are impaired for designated uses due to excessive nutrients. This means that pollution may make the waters unsuitable for recreational use, public water supply usage or consumption of its fish or shellfish. However, some waterways, such as the Chowan River and Albemarle Sound often experience large algal blooms and are not listed as impaired by nutrients on the North Carolina impaired waters list even though they are showing visual evidence of nutrient overloading. These waterways have been experiencing algal blooms in recent years to an extent not seen since the 1970s.

“I think right now that Chowan and Albemarle Sound are areas that need a lot of attention pretty quickly, because there’s some pretty massive harmful algal blooms,” said Dr. Jud Kenworthy, a former research biologist for the National Oceanic and Atmospheric Administration. 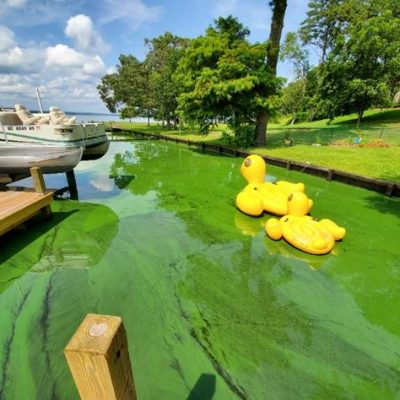 An algal bloom in the Chowan River in September. Photo: NCDEQ

Kenworthy explained that the budgeting and scientific monitoring issues “can’t be separated. They go hand in hand.”

“The state government just doesn’t spend enough money and that’s the problem. And so, trying to adopt some sort of criteria or standard in our estuaries is going to require vastly increasing the money we spend on the people and the infrastructure to actually do the monitoring,” he said.

Excessive algal growth occurs in a setting of abundant nitrogen and phosphorus coupled with conditions of warm temperatures, plentiful sunlight and still waters. Water quality standards for nitrogen and phosphorus are not in place in North Carolina. Instead, North Carolina uses chlorophyll a as an indirect indicator of the amount of algae that is growing in the water. As Coastal Review reported last week, this brings into question the efficacy of current standards and tools used to identify potentially nutrient sensitive waters.

Sound Rivers Tar-Pamlico Riverkeeper Jillian Howell told Coastal Review that the organization often does water quality sampling to detect both organic and inorganic forms of nitrogen, as well as phosphorus.

“We see high or elevated levels of these nutrients. But there’s no standard to compare that to,” she said. “So even though we know that these levels are not naturally occurring because they’re too elevated and it is from like inputs. Whether it be the sources such as stormwater or septic or sanitary or human waste or from animal runoff, the levels are elevated and are too high, but again, there are no standards.”

The presence of these excess nutrients is not only a problem for the ecosystem, “it can also be a public health-related issue,” noted Howell.

Exposure to harmful algal blooms can cause serious health problems including rashes, stomach or liver illness, respiratory problems and neurological effects. Toxic water conditions create unsafe conditions for pets and livestock as well. Exposure can lead to illness in animals or death.

Fish kills are the visual evidence of impaired waterways but also a blind spot.

“It feels like lots of folks are kind of desensitized to this because it is a regularly occurring thing now that we see,” Howell said. “But just because it happens frequently, that doesn’t mean it’s normal. That’s a sign that waters are in distress and that the nutrient burden is too much for our waterways.”

Nutrient pollution can create areas with little or no oxygen known as dead zones. Once the harmful algae die, they are decomposed by bacteria, which removes dissolved oxygen from surrounding water. One prominent example of a dead zone in the United States is in the Gulf of Mexico. Kenworthy explained that in the late 1990s and early 2000s there was a substantial effort to educate farmers that people across numerous states were contributing to the pollution of the Mississippi River watershed, which stretches all the way from northern Minnesota down to Texas.

There is a possibility of dead zones developing in North Carolina waterways. Kenworthy said, “What people need to understand from inland areas and the Piedmont is that if you’re in a watershed that’s delivering surface water to an estuary, the impact is going to have a really wide scope.”

Thick, murky algal blooms also block sunlight from reaching the bottom of the waterway preventing the growth of underwater vegetation.

“There were a few fairly large-sized seagrass beds along the northern shore of Albemarle Sound in the Edenton area. Five or six years ago, they were pretty expansive, and now they’re gone,” Hall said. The loss of underwater vegetation creates shoreline loss and changes in the marine environment.

The sources of the nutrient pollution include agricultural and urban runoff, wastewater treatment plant discharges and air pollution.

Stormwater runoff can carry nutrients from urban or agricultural lands and they accumulate in surface waters and groundwater. Wastewater treatment plants, home septic systems and animal waste also are primary sources of excessive nitrogen and phosphorus in waterways.

Fossil fuels emit large amounts of nitrogen into the atmosphere that can slowly infiltrate waterways.

Hall explained that everyone is contributing to the problem and that it’s going to take people being aware that it’s not just agricultural fields and big point sources, but also things like lawns.

“There are things people can do, and if everybody did it, it would probably make a difference” in restoring and protecting North Carolina waterways, he said.

One way reduce your nutrient footprint is to apply fertilizers only when necessary, avoid application before windy or rainy days, use the recommended amount and avoid fertilizing close to waterways. Chemical fertilizers contain nitrates and phosphates that make their way into watersheds mainly due to stormwater runoff.

Other ways individuals can control the amount of nutrients leached into the environment include properly maintaining septic systems, properly disposing of pet waste, planting native plants and using water and energy more efficiently.

Stewardship, along with community awareness and involvement, aids the health of North Carolina waterways. Howell, the riverkeeper, also stressed the importance of paying attention to what’s happening in your local community and being engaged and showing up to public meetings.

“All of these water systems are stressed but they’re not dead,” said Hall of UNC. “They’re still really nice places to visit and canoe and fish and swim.”